Thanks to our Australian agent, Leigh Blackall, for sharing this long scrolling link of essential readings, web sites related to our cause. It is ins support of a project we need to focus some attention to, the 2837 University, in which a San Diego neighborhood aims to explore how they can forma community educational institution, using existing locations and personnel. 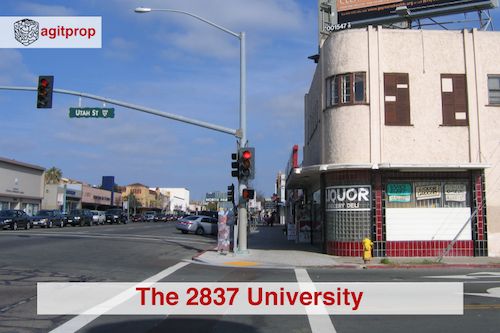 The 2837 University is a project that re-imagines the Agitprop space and the surrounding neighborhood as the site of a micro-university, with the goal of opening a conversation about re-purposing the concept of University Education in the context of the ongoing critique of the corporatization of the University. We will begin by investigating the relation of the construction of a mass consumer class in the US after WWII and the formulation of a new concept of individuality that borrowed its notion of self-expression from the legacy of Romanticism, all the while yoking the seeming freedom of expression to the profit system of hyper-inflated production and infinite obsolescence. As the university system is increasingly dominated by corporate interest, the very notion of the student is replaced by that of the consumer, and the value of a university education is understood strictly in terms of the acquisition of readily available skills and knowledge bases that are immediately transferable to exchange value. We might begin from the question of what has been lost; what was the notion of the university student before it became the university consumer? And we might begin provisionally with the idea that education, the work of the student, is to come to terms with a freedom that, far from being the trap of infinite choice that masks itself as the freedom of a consumer class, is in fact the work that one does on oneself in order to free oneself from one’s limitations. The question remains, how to construct one’s own individuality without succumbing to the myopia that characterizes the absolute atomization of a self-interested consumer class, how to reclaim and reconstruct a social fabric that is not at all points grounded in the logic of the market, and how the structure of the University itself, which encourages the excessive borrowing, atomized suburban living arrangements and passive resistance strategies characteristic of the trap of the consumer class, can be retooled to encourage and make possible the work of the student, a work that continues despite all these hindrances, perhaps we could rethink the University as a space which is made by the work of the student however and wherever that may take place? The 2837 University will run from January to March of 2011; during this time the space will also play host to a series of installations, screenings, and performances that address and contribute to the conversation initiated by the project.

Viva the Revolution! Agent Blackall has earned his stripes, and is not a foot soldier in the Secret Revolution.

Do you want your stripes? Just share us an example of a small or large practice that is quietly innovating or just tag the revolution.

One thought on “Agent Blackall Provides Essential Readings for the Revolution: The 2837 University”